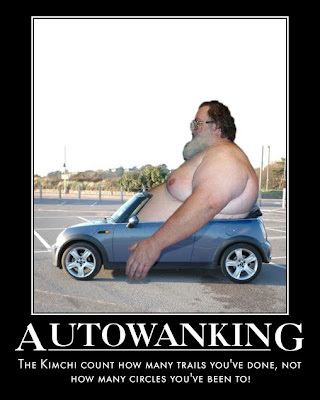 Someone has to make sure the beer gets there! Oh and that you wankers get your asses back to point A.

are you including yourself on this one, I remember a time when you was GM that you said you did the hash but only showed up at the end and never actually see trail, while the rest of us froze our asses off doing trail.

You've been doing drugs over there. I've driven to the circle before when I couldn't make it to the start of a hash, usually because I'm with your mom. But to show up to the start of a hash, and then bail because it's raining or trail might have a hill in it or whatever, total wankerness! Leave that shit for the old folks at the Pikes Peak hash!

if someone is going to talk shit, they better own up and name themselves! This Anonymous crap is for Autowankers...and ones with sandy VaJJs.

I agree, Bicyclebleeder...what's up with the annonymous crap? Doesn't make sense to me. And as far as brownie goes, obviously he is the laziest and most out of shape of all of us. He tries to snake out of trail ALL the time with the guise of beer check chick, etc. What a fag.

Well, I don't actually have a name and this google account has naked pictures on it now you guys don't really want to see a sandy VaJJs now do you?

2. Brittney Spears reads our blog. All those letters and videos i sent paid off.

3. This has turned into a retarded thread.

4. The Halloweenie hash is gonna be awesome. Trust me.

Brittney Spears told me that autowankers aren't real hashers and should drink water instead of beer.

Maybe they do? And Britney is hot for brownie!

Now, Now C-4 I'm only that way cause I had to fix my google account. It's only me Just Korrie

Oh I knew you knew it was me all along right Net?? BTW aren't you supposed to like work or something?

Can you say the same?

Jeez! Ok, can't we all get along? And maybe start a new post...this is the longest response thread I have ever seen! brownie!!! Quit working on your coffin and make another motivational poster!