Bloody Z is no longer allowed to choose downtown bars for the on-after. I mean, really? The Underground?

Pics from the latest kimchi hash can be seen here.
Posted by brownie at 7:20 PM No comments: 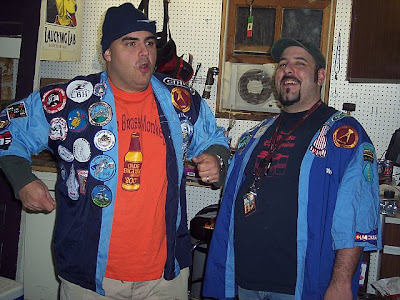 On behalf of Granny Lingus, I am letting everyone know that his wife, Wheeler Squealer, will be making one final Happy Shirt order before she moves to Colorado permanently. Cost is around $35, and she needs the orders pretty soon. I've posted the same thing on my blog, so let me know there.
Posted by Nick at 2:40 PM No comments: 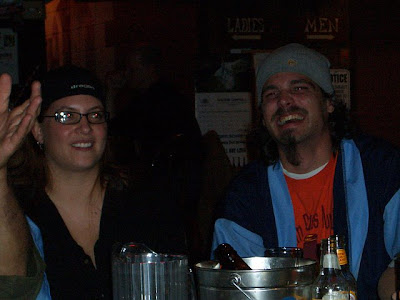 This is a hash trash from Bonesucker's blog. I hope she doesn't mind that I copied it onto the Kimchi Hash trash page:
"There's T-cubed, still insisting this whole proposal/acceptance thing went on during my last visit. And having not slept for two days, I forgot about something. I ALWAYS wear my wedding ring when I'm teaching; I feel bad when I have to shoot someone down and it takes a lot of guts to ask someone out these days. It only had to happen twice before I decided I would just pretend I'm married when I'm teaching, not like I'll see these guys ever again for more than teaching a class. AND I don't even feel a lick of bad for shooting down some soundrel who would hit on a married woman, so it works out well. Long story short, I forgot to remove the ring before I headed off to CO. Then there was no place safe to leave it... so I left it on. So, I'm sitting at the bar, and T-3 is going on about how he's bringing a minister and two rings to BFE and I simply put my chin in my hands and asked him, "Why ever do you think we would need a minister?" Of course, he's standing on my left side and this puts the ring in clear view. His reaction, "OH MY GOD!!!!" and he proceeded to call everyone and tell them that we got married. On a side note, we were only going to let him believe it for a little while, but he played it so well that we just let it be and decided when he accused us that we'd announce it was a false accusation. I'm a terrible liar, I fall out laughing every time I try. So I never lied, I never said we were married, I just never said we weren't. 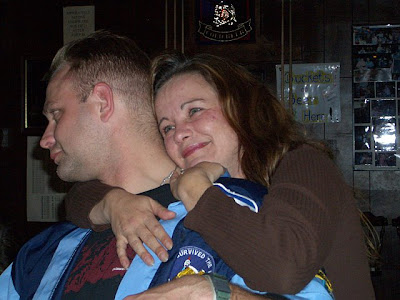 (Above: Bonesucker and Bloody Z being cute at the on-after. Enough to make you wanna puke!)
From there, we fetched my luggage, hung out for a while catching up and then headed to Arctic to catch the first wave of "Congratulations" and "Are you stupid?"s. Played a few games of chess and beer pong and even beat T-3 and 7-second (and I am proud to say that for once, I made all but one of the balls!) Arctic has started a beer-pong league and had a new set of rules, the most awful of which being if I laugh and miss, they get points for distractions. NO FAIR! Especially considering I'm almost always laughing and I almost always miss. The only defense I could muster was doing more retarded things to distract them so it was an even playing field. Didn't stay out too late, headed back for some sleep after two days without any, and got up the next morning for some reason pissed off at my hair. Perhaps because I can exercise anger on my hair, but not on the state. REALLY, in what world do you get punished for doing exactly what you said you would and then some? Only as a government contractor. So while I was screwing around getting ready, I cut my hair.Then it was off to a barbeque - sort of - at "Port" Carson (I have no idea why this tickled me so!) and back to hang out until it was time to go to the MOPP.Disclaimer - I totally would not have let Net in on the joke, except he outright asked and I couldn't lie, but he agreed to keep our secret! 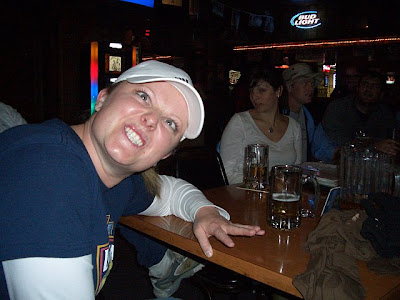 (Above: The newly named Nappy Headed WHORE displaying anger towards her new identity.)
The MOPP trail was perfect! Not too long for a nighttime trail, but also not just right around the corner. I walked with LDS, MILF and Just Tom the whole way recalling cartoons and silly commercial songs the entire time and even found flower on trail!Trail ended at a little bar (Willie's?) where we pushed a ton of tables together and pulled out a dozen or more balls and started playing a twisted version of beer pong with all the balls bouncing around the table in some sort of free-for-all while we waited to circle up; it was a blast! Brownie and I had the customary Jager shot, but he left pretty early.Donnie finally got in from the airport (hooray Donnie!!) and we circled up at the table. All the usual down-downs ensued and we started to try to name Just Tom and Just Dani, but the Arctic van pulled up and we made a dash for a beer check of On-on Ale outside. The naming continued out there; Just Tom becoming Hot Beef Anal Thermometer and..... a tabling of Just Dani since the bar owner threatened to call the police since we were in the parking lot drinking and not buying her beer. So, we headed back inside and finshed off naming her Nappy Headed WHORE! I'm thinking this naming thing could have gone on for a while, but the bartender was in a crabby mood, so we almost made it to the eloping accusation, but they wanted to save it for the PRC, so we swung low and sang some truly awful karaoke, including a group hit "Brass Monkey"; turns out none of us know all the words. Should have thought of it then, but we COULD have done it monkey style. Ah, the great ideas you come up with later, when you're sober! I almost got in a fight at the bar, some chic who was playing pool and singing thought I was hitting on her boyfriend (and he was EWWWWW! Even worse than the fo-teeth guy!) So I hit on her and that seemed to diffuse the whole thing! Psychology is a wonderful thing! 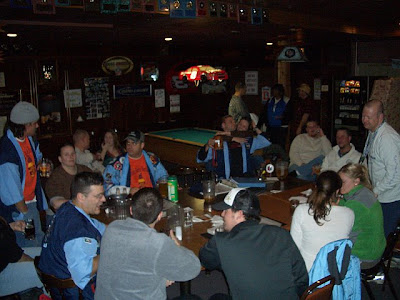 Above: The pack pushed several tables together to create an ultimate beer pong venue.)
We headed off for some tacos from there and back to Arctic where they wouldn't call the police for drinking On-on Ale, in fact would be quite happy about it, and played some more beer pong. Went home pretty early that night too, saving up for the PRC."

T3 and I are "haring" this one - on-before, start and on-after are at Arctic, so expect to get Sh***y drunk! We've mapped out a course around Arctic - 4 laps equal a mile!

First lap - a shot and a beer.

Third lap - a shot and a beer.

(Brownie pukes between the third and fourth laps - at least, I think that's how it goes)

Where's the next hash? 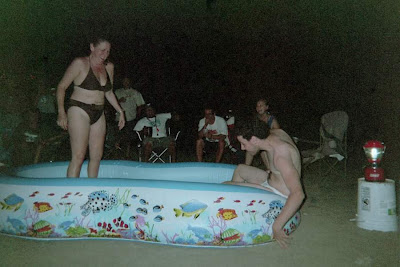 Lincoln and T-Cubed, you guys have a start point yet? We have to put it out on the net!
Posted by Nick at 7:49 PM 1 comment: 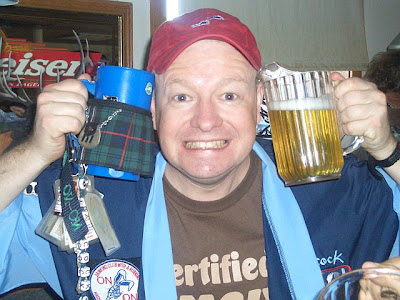 "Just know I'm gone for the next CKH4 on 28 Apr and all the ones in May (yes, including BFE [boo]."
This was penned by NASCOCK. If you can't see what I'm seeing, there is a fucking four at the end of CKH... Oh my God! He must be confusing us with his other five thousand kennels. I say we make him pay for this transgression. Let's make him pay dearly.

Kimchi intelligence agents are reporting the possible closure of TexMex, one of the stops on the Platte Road Challenge. I will confirm this shortly. However, if it really is closed, we need to decide what to do. The options:

I) Skip it. Eleven bars is enough, especially given that we'll basically have unlimited beer at the end.

II) Include the El Dorado Lounge. Some of yunz have been there and it is Kimchi acceptable, as well as in the 80909 zip code. However, this adds a significant amount of distance to the crawl, probably bringing the total distance close to 5K.

III) Include the Finish Line Lounge. See reasons above, though the distance here is a bit shorter.

IV) Include both El Dorado and the Finish Line. Why go to twelve bars when you can go to thirteen!

V) Have a car trunk full of beer at the TexMex stop. I'm not for this as it goes against the usual flow of a pub crawl and I don't think it would be wise to attract too much unwanted attention considering how drunk we're gonna be at that point.

So, what are the thoughts of the pack?
Posted by brownie at 11:50 AM 8 comments: 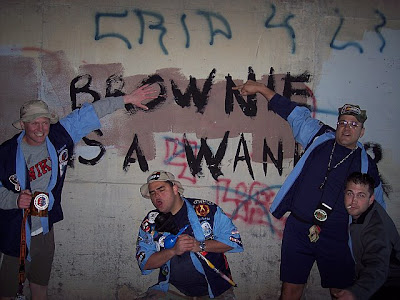 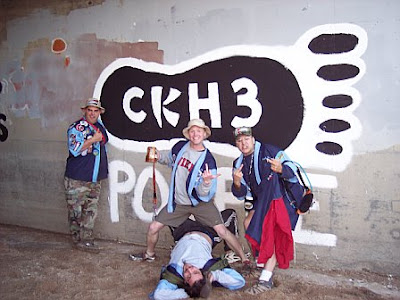 Posted by brownie at 7:52 AM No comments:

The Kimchi hash will be celebrating their 100th trail on Saturday, April 14th. We'll be ditching the usual hash tradition of mud, sweat, and beer in order to have an epic pub crawl along the lovely and scenic Platte Road.

Start will be at Calamity Jan's at 2PM. The order of pubs:

Little something for everyone here - dive bars, a strip club, non-English speaking bars (cerveza, por favor!), a punk club, crime dens, yuppie bars, a gay bar. And, of course, a brewery. 80909 ain't just a zip code, it's the secret code to total drunkennesss!

It's a pay as you go event, plus normal $5 hash cash. Hash cash will be put towards buying kegs at Arctic Brewing at the final stop, so anyone still standing will easily be able to recoup their loot.
Posted by Lick My Lincoln at 6:22 AM 5 comments: