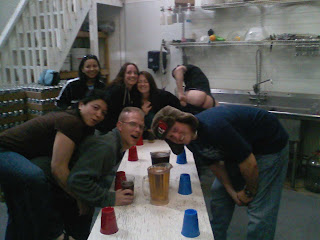 What: CKH3 #154
When: Saturday, May 9th at 2:00PM.
Where: Arctic Craft Brewery, 2506 E Platte PL. Colorado springs Co. 80909 --- (719) 332-3011
Hare: 7 Second Pump
Bring: $5 and a thirst for some great microbrew.
Notes: This will be the Centurion hash at Arctic Brewery... trail will be a minute walk away from the brewery... the goal is to consume one hundred one ounce shots of beer in one hundred minutes. After fifty round trips, your journey is complete and you are an official "Kimchi Centurion." We understand that it is not a "real" trail. When we care, we'll make sure everyone else knows.
Posted by Nick at 12:09 PM 2 comments:

For those who haven't heard I am back state side do to a tragedy, and now have custody of my son. Me and my son need help this Saturday, May 2nd, we are transfering my stuff from storage into a U-haul truck around 9am at Motor City Mini-storage (914 Motor City Dr, Colorado Springs, CO 80905). Everything is already packed, no packing or un-packing will be required just moving it from the storage to the U-haul truck and that's it! If a lot of people come out the faster it will get done, and the geater chance everyone can make to the hash that day. For those who come out and help I'll pick up some beer for rest breaks, if we get done before the hash, I'll also buy you drinks. More the merrier. I really appreciate any help.

Finally got these uploaded.  Click here to see the pics.
Posted by brownie at 1:39 PM No comments:

I don't get it. This was posted for almost two weeks and then I get a text asking if Mexican Marble Muncher is haring? I talked to Fatal today and he says it is still on at T&B tomorrow.

I'm really sorry if I contributed to any confusion. Seriously.

What: CKH3 #152 (Pick-Up Hash)
When: Saturday, April 11th at 2:00PM.
Where: Thunder and Buttons, 2415 W. Colorado Ave. in the Springs (Old Colorado City).
Hare: Fatal If Swallowed.Bring: $5 and a thirst for some tasty brew.
Notes: A pick-Up hash involves the hare getting a 5 minute head start. Once caught, the hound that caught the hare becomes the hare and gets a 4 minute head start. This process continues with the next person to catch the hare getting 3, then 2, then finally, a 1 minute head start... Trail ends at a predetermined time.... say one hour after the first hare was away. Fatal will have all this crap figured out so the rest of us won't have to think too much.
Posted by Nick at 2:54 PM No comments:

Crying Game in the news:

There is a hostage situation at the Mesa Inn!