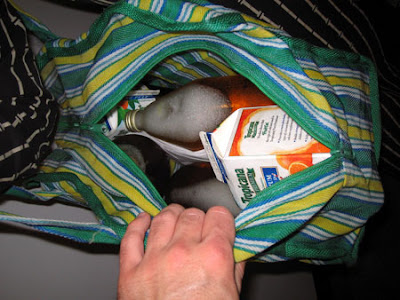 I propose that all Kimchis should be required to travel to the hash with "Brass Monkey Starter Kits" as shown above. What do you guys think?
Posted by Nick at 3:59 AM 2 comments:

Z actually laid a trail that wasn't too fucked up yesterday!
Posted by brownie at 6:10 AM No comments:

Hey, the Kimchi founder finally got off his lazy ass and joined the Global Emeritus H3! Lincoln, you'd be eligible for this. You can see all the founders here. Net, I took the liberty of sending this pic to Haz for the website... 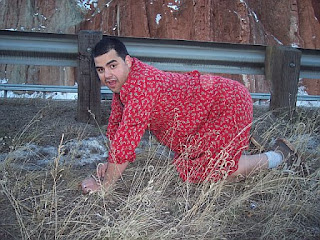 I've added a name to the list of memorial MOPP hashes. These trails will be hared on the same day the following people die:

Think I got drunk once and added another name, but I can't remember. Damn Arctic brews!
Posted by brownie at 9:17 AM 2 comments:

"Are you guys gonna stay behind and hold down the fort?"
- Hand Job

We should listened to Net and stayed at the bar to drink.

OK, a LOT of questions have been asked about how to earn your Kimchi tabs. Nuthin' But Net has come through with an "official" set of rules (this is Kimchi - we're all usually too drunk to decide on whether or not someone earns a patch by the time we get to it in circle anyway!).

The Colorado Kimchi Hash House Harriers will be issuing specialty tabs to qualified hashers starting on August 6, 2005 at the 3rd Annual CKH3 Analversary. To qualify for the tabs, hashers must complete the given qualification assessments listed below.

The Special Olympics Tab will be made available only to hashers who have completed a “Beer Mile” qualifying event. The first “Beer Mile” event will be held on August 6, 2005. To complete this qualifying event, one must run one mile around a standard ¼ mile track, stopping every ¼ mile lap to chug one 12 oz. vessel of their choice of beer. There will be no time limit for this event. Qualification will be awarded upon completion. “Beer Mile” events will be held every three months, depending on interest in qualification.

The Retard Tab will be made available only to hashers who have been voted into this elite group. “Retards” are an elite organization of hashers who have displayed exceptional taste in wear of granny panties to the Colorado Kimchi hash. Only when an exceptional pair of granny panties are worn to the hash, and voted as “Retard” worthy, may a hasher have the privilege of calling his/herself a “Retard.” Always remember: “Retards Lead The Way.”

The Tard Linguist Tab will be made available only to hashers who have successfully completed the “Tard Linguist Qualifying Event.” The qualifying event will entail a hasher completing five tongue twisters, randomly chosen from a pile, while chugging one 12 oz. vessel in between each of the tongue twisters. Qualification will be awarded to the hasher who completes this event to the satisfaction of the pack, which will ultimately vote on the hasher’s “tard” articulation.
Posted by Lick My Lincoln at 7:21 PM 4 comments:

1) OK, wankers, since Grannylingus, LDS and I were probably the only sober ones in the bunch, I guess it falls to me to write the hash trash for Saturday's run.

LML did chalk talk after the hares were away and then the pack launched in seemingly every direction after we gave virgins Just Leokesh, Just Tess and Just Nick the lowdown (and for Kimchi that's low).

First check was on the intersection, then there was a disturbing dearth of markings until NBN found one flour puff in a tunnel under the road and LML stumbled across the playground check. We jumped off the swings, crawled through the concrete tubes and then set off in search of the next trail marks. We found two in a field. Then nothing. Most of the pack went off to the right, up the hill and promptly got lost. Bloody Z and aRgoNutz found the actual trail, which the rest of the pack was still studiously ignoring, and caught the hares.

The rest of us eventually found an intersection and got back on trail. We ran into the hares leaving the beer check, they explained they had already been snared, and then we drank brass monkeys and waited for the rest of the pack to catch up. By the way, Shut the Fuck Up, from P2H4 caught up with the pack.

On out, followed the trail to the second beer stop, which was in MILF's garage. Cock Scratch Fever (Duh-nuh-nuh-nuh), Just Nick and Just Tess never showed up. After some cell phone tom-foolery, we located them and CSF loaded them into his truck to take them to the end. Just Dani had to bail to go to the BANF Film Festival - and wanker Brownie picked her up to take her (we think he didn't run trail because his Air Force PT test hurt his vagina). Dani will definitely get down-downs and a shitty name for that one!

The rest of the pack headed on out again, ran into the shadow of the mountain as it got progressively colder, climbed into the back of CSF's truck and rode back to MILF's for the on after.

Virgins had to split a hot dog with their sponsors using only their mouths (interesting for CSF and Nick), then do their down-downs. NBN was amongst those nominated for the Hashit for peeing in Granny's truck Friday night, but Bloody Z ended up "winning" it for having a wounded dog (oh, and there was all that crap about flying to Texas to Hash without telling anyone).

I am sure I forgot something. Drink for being Kimchi!

So I decided to be like Brownie today and enjoy the great weather, but I did like 30 miles or so. Man did it feel good to ride the ol' scooter today. Anyway along my merry journey I found out that Knob Hill will be serving steak this Friday for 5.25 or in that ball park anyway, and the on St. Patty's day starting at 8 am Navajo Hogans will be serving Leprechaun POOP. Just a thought since we all like poop of maybe stopping by there before we hit down town.
Posted by GrannyLingus at 8:29 PM 4 comments:

Ok,
So I made fun of NBN for losing everybody's number because I thought I had them all saved, not happening so please can you email me or call me so I can have your numbers again.
Dani we may have to get together and talk about these trails you speak of in Fountain, as I will be moving to the New Gen homes right off of powers.
Posted by GrannyLingus at 7:31 PM 5 comments: